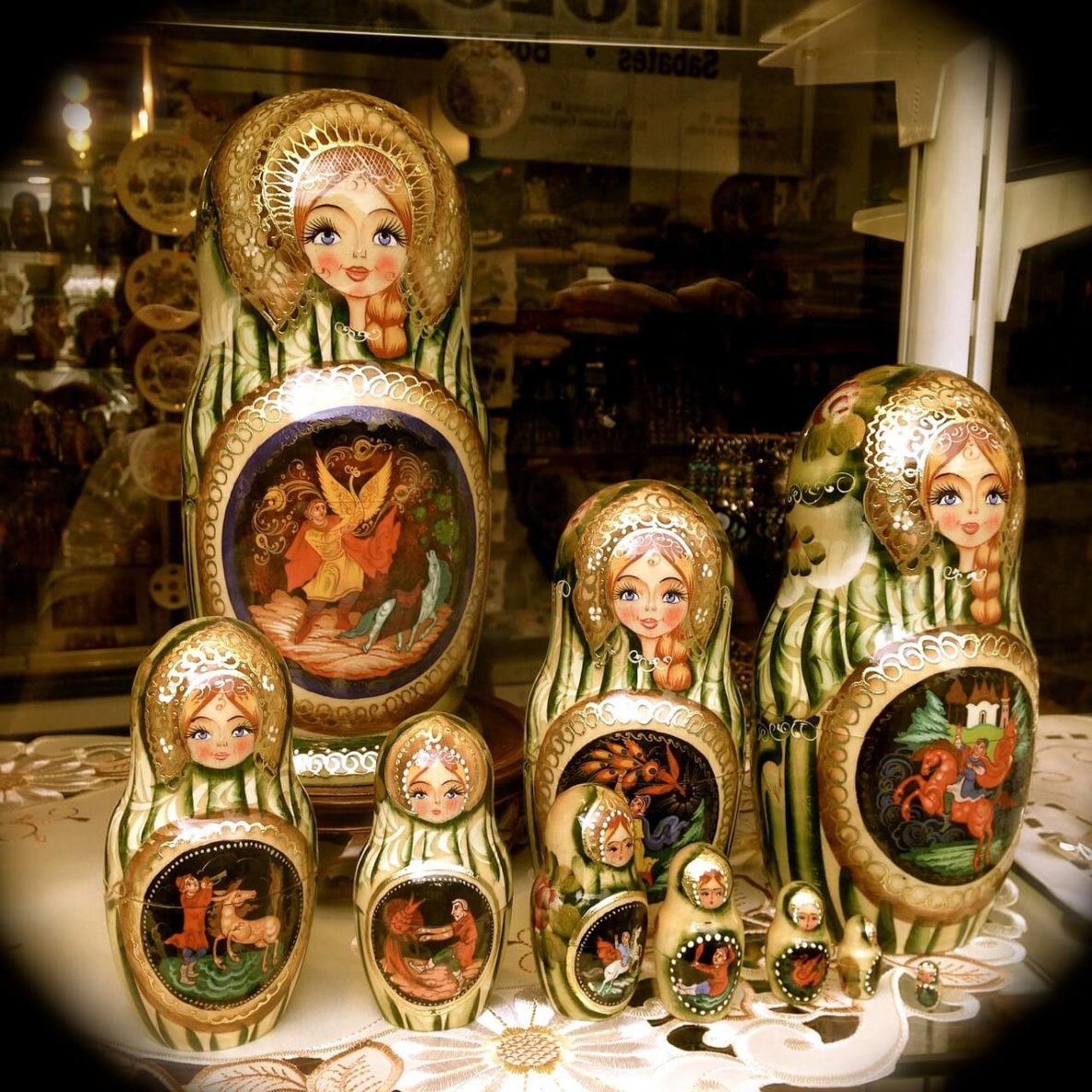 The Asian Origins of Russian Dolls

The Asian Origins of Russian Dolls 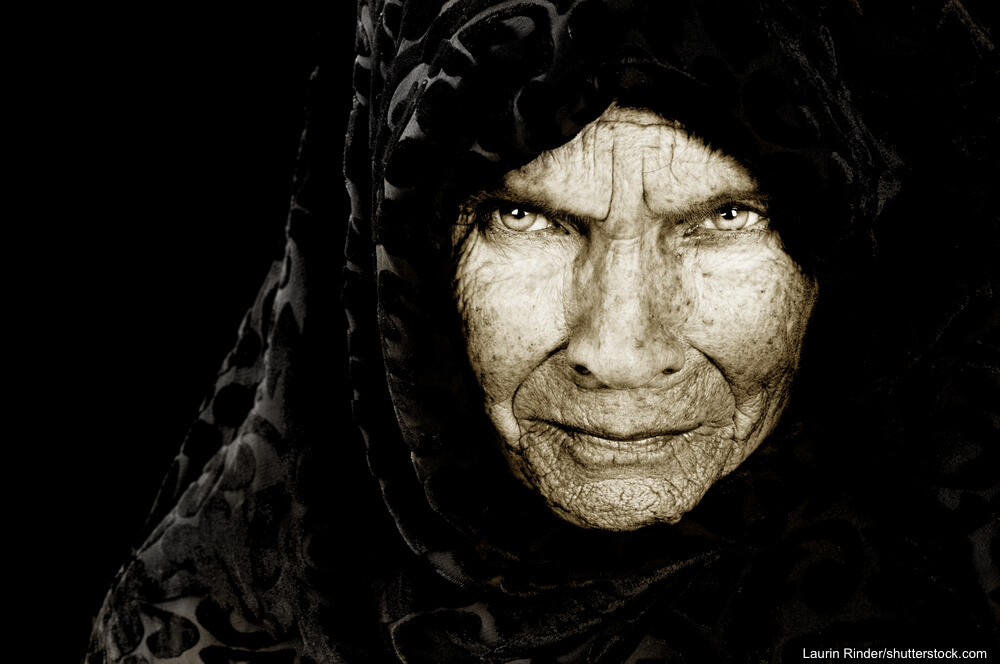 There are few steadfast facts in the world of folk culture: by looking a little beneath the surface, we find that many of our commonly held assumptions turn out to be completely false. Nothing illustrates this better than the case of the matryoshka, the Russian nesting doll

There are few steadfast facts in the world of folk culture: by looking a little beneath the surface, we find that many of our commonly held assumptions turn out to be completely false. Nothing illustrates this better than the case of the matryoshka, the Russian nesting doll

It is the quintessential Russian decoration. For the foreigner, no other object manages to encapsulate the spirit of this huge and diverse country as succinctly as the little wooden dolls that can be found on shelves and mantelpieces throughout the world.

And yet, for all its popularity, the matryoshka in reality has very little to do with Russian culture at all… 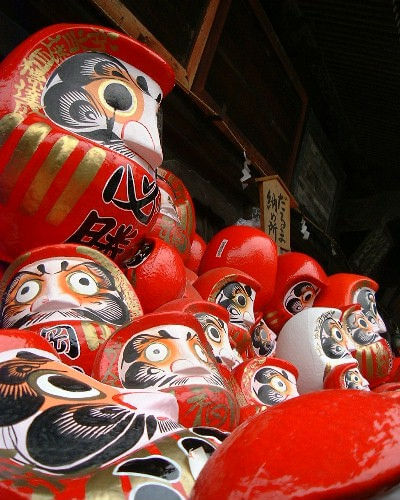 In his groundbreaking overview of Russian culture, Orlando Figes briefly mentions that the matryoshka was ‘dreamed up in response to a commission from the Mamontovs (Russian industrialists and art patrons) to make a Russian version of the Japanese nesting doll … the myth was then established that the matryoshka was an ancient Russian toy.’

While managing to shatter this illusion for us in under a paragraph, Figes swiftly moves on and leaves the full story of the matryoshka untold.

Here we fill it in.

It shows that, underneath its European veneer, the Asiatic roots of Russian culture are deeply engrained – the story of this iconic doll begins hundreds of years ago, far away from the lands that would eventually become Russia. 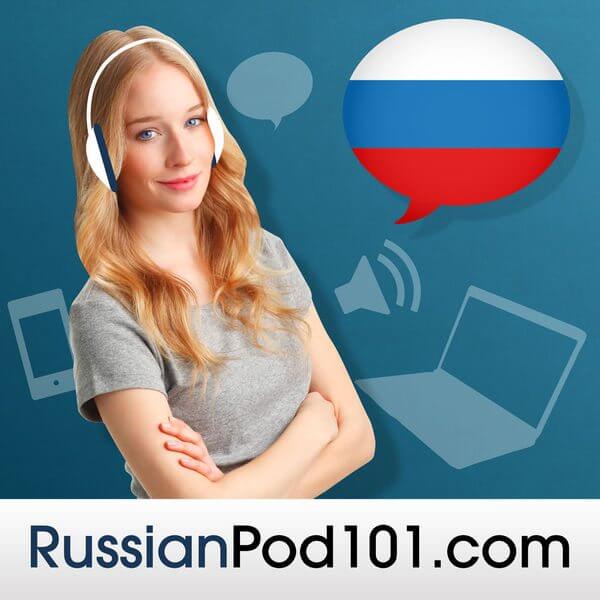 DO YOU WANT TO LEARN RUSSIAN?

RussianPod101 is the best program for anyone who wants to master Russian.  Sign up today to receive a wealth of free video lessons, podcasts, vocabulary sheets, and other language learning material!

A Stranger Comes to Town

As with many ancient figures, no-one is quite sure where Bodhidharma came from. 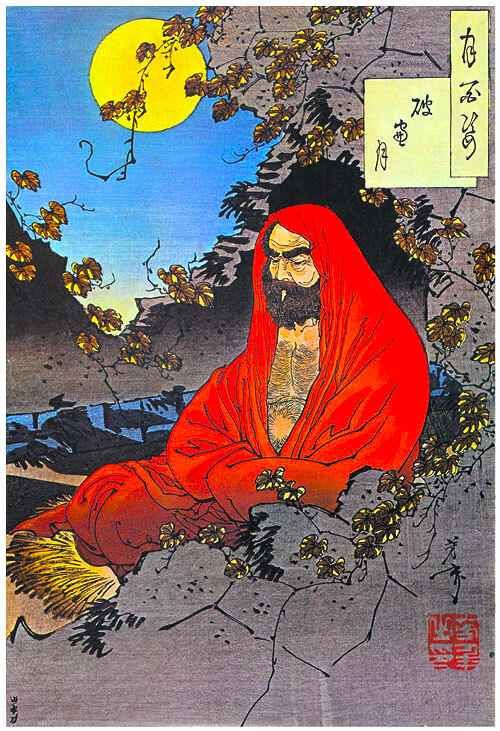 Various sources claim that he heralded from regions as far apart as Persia and Tamil Nadu. All that is certain is that sometime in the 5th or 6th century A.D. a Buddhist monk crossed over one of the treacherous mountain passes leading out of South and Central Asia and made his way to China.

Aside from establishing the Chan school of Buddhism [lk Wikipedia], the most notable incidents of Bodhidharma’s stay in China concern the physical misfortunes that befell him in pursuing Nirvana.

Feeling that it was time to move on, Bodhidharma (God only know how, considering he didn’t have any limbs at this point) travelled eastwards to the mysterious set of islands off the Chinese coast.

The Wierdest Man in Japan

It is difficult to exaggerate how bizarre Bodhidharma must have looked to every and any Japanese that laid eyes on him.

Japan was one of the most reclusive kingdoms in the world, and, apart from the odd sailor or ambassador, virtually no-one had would have met a single non-Japanese person in their lifetime. Even certain peoples of the Chinese empire would have looked alien in Japanese eyes, so this limbless, hairy, blue-eyed barbarian must have seemed positively otherworldly..  [498]

Birth of the Matryoshka 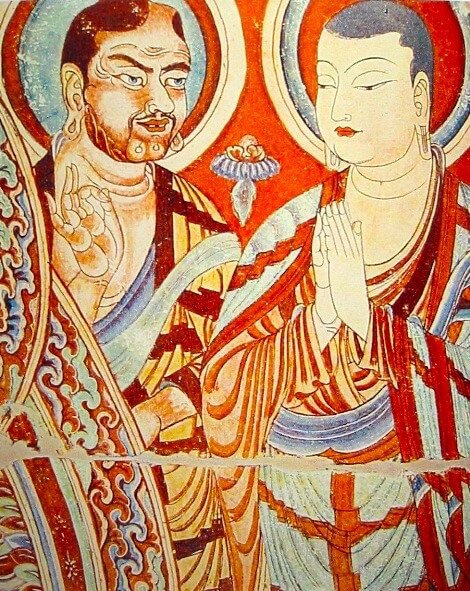 It was the Japanese fascination with this stranger’s savage appearance that led to the birth of the matryoshka as we know it today.

Bodhidharma became a celebrity throughout Japan and his unusual physical appearance lent itself as a gift to artists looking for inspiration (whether for their paintings, sculptures, etc.). By the 18th century, the now-ubiquitous Daruma (the Japanese name for Bodhidharma) artistic theme was being applied to a nesting doll that had evolved from the following three themes:

Okiagari-koboshi. These were a sort of rudimentary roly-poly dolls that were commonplace from about the 14th century. Made of papier-mâché, the dolls were little more than cheery good luck charms at first. However, with their great, bulbous heads and uncomplicated body, it was only a matter of time before Daruma was painted on them – his limbless figure was ideal for the squat, skittle-like shape of the doll 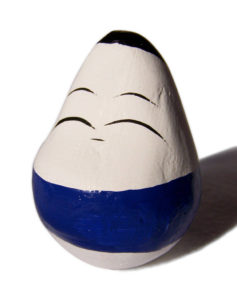 The Seven Lucky Gods. From left to right: Hotei (diviners and barmen), Jurojin (the elderly), Fukurokuju (chess players), Bishamonten (soldiers), Benzaiten (artists, writers, dancers, and geisha), Daikokuten (cooks, farmers, bankers), Ebisu (fishermen). Another common artistic theme, with each god representing a particular profession. They provided the inspiration for creating a set of smaller dolls that belonged to one another.

Chinese Boxes. Found all over the Far East for centuries. Each of these wooden boxes would fit inside the next larger box. This was the origin of the characteristic nesting storage that the dolls would later adopt

Gradually, each of these influences would merge into the ‘Daruma Doll’, what we would recognise as a typical matryoshka, but with the visage of the ancient Buddhist pilgrim. The question then arises: how did this oriental decoration come to dominate Russian toyshops then and to this day?

The Workshops of Sergiev Posad

The answer is that Japan was prised open by the Western Powers after the mid-19th century; the secretive island suddenly found itself within the grasp of colonial hands.

One of the main results was that Japanese products and art exploded in popularity and were sold across the world – in particular, they were a breath of fresh air for European artisans and patrons. 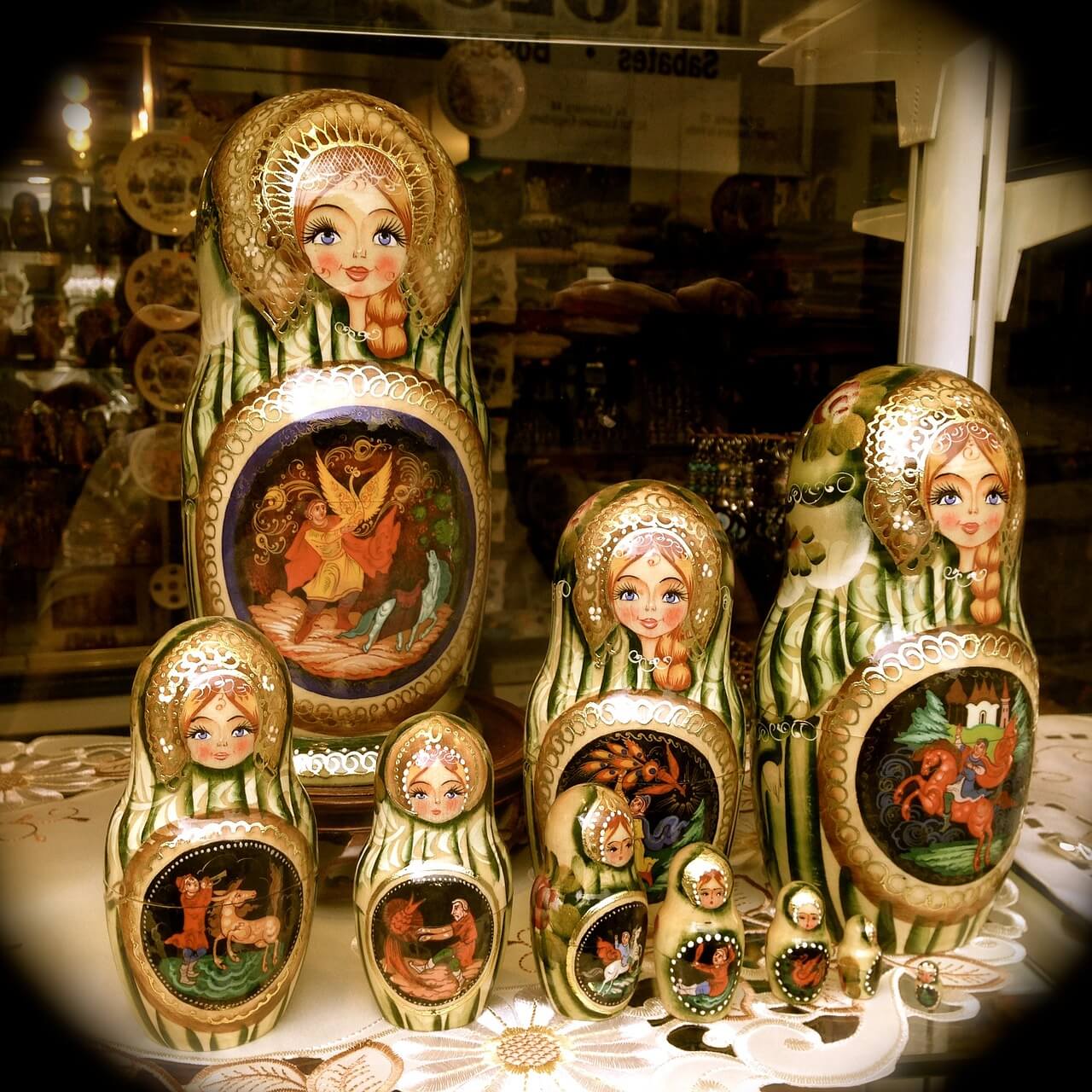 The official story states that in around 1891 a Daruma doll found its way into the hands of the artisan, Sergei Malyutin, who was working in Savva Mamontov’s workshop, Detskoye Vospitaniye (Children’s Education) in Sergiev Posad. Together with the wood-turner, Vasily Zvyozdochkin, Malyutin copied the strange little doll and painted on a Russian peasant-woman with a chicken underneath her arm.

This rather sterile account of the matryoshka’s creation doesn’t really convey how clever Malyutin’s adaption of the doll was. Natalia Sokolova provides a much more interesting story of their inception:

The Japanese toy had a secret: the old man Fukuruma contained increasingly smaller versions of all his family members inside his figurine. Once, on a Saturday, when the estate was visited by members of the artistic elite, the lady of the house displayed the amusing figurine. The nesting doll attracted the interest of S.V. Malyutin, who decided to make a similar toy. He didn’t recreate the Japanese deity; instead he drew up a draft, depicting a peasant girl, wearing a brightly coloured headscarf. To make the girl look more “businesslike”, the artist drew a black cock, cradled under one of her arms. A smaller figurine inside the first one was a young girl holding a sickle. Sisters can’t be happy without a brother, therefore an even smaller piece was a figurine of a young boy dressed in a brightly decorated shirt. The set of figurines made up an entire family, close-knit and hard-working. The doll didn’t even have a name at first. Only when it was turned on a lathe and painted, the name struck the doll’s creator as something obvious – Matryona. Tea at evening parties in Abramtsevo was served by female servants who were called by this name. Had Malyutin turned over a thousand other names in his mind, he couldn’t have thought of a better name for the wooden dollNatalia Sokolova 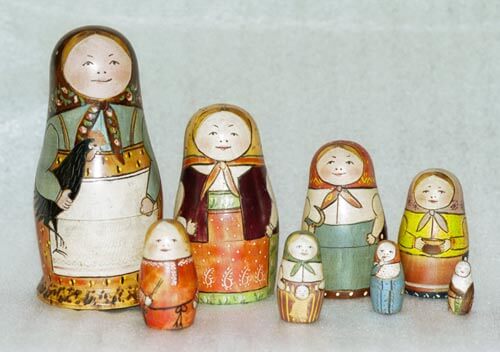 It was a marketing coup – perhaps one of the most successful in history.

Everything about the doll – its name, its cheerful painted design, and its secretive interiors – resonated with children throughout the Russian Empire. The dolls were already selling in their millions by the end of the 19th century (with boosted popularity after making an appearance at the World Fair in Paris), and would continue to do so forever afterwards.